I have a friend, a longtime friend of 30 years, to whom I have always been supportive and kind. She, on the other hand, has committed a number of non-friend offenses, going back to the early 90s when we both were at a law firm in Los Angeles. She couldn't understand why the other secretaries disliked her so much. Here's the clue - they disliked her because they liked me and were offended by her talking about me disparagingly behind my back!

So now here we are, a goodly number of years later - and not much has changed. Someone she once worked with, an intelligent woman who drinks like a fish and becomes maudlin and sloppy after she indulges in her nightly habit, is staying with us and suddenly, I am like a bad smell in our household. My "friend" feels perfectly free to laugh at me, insult me and generally act as though I have no right to live. She is actually offended that I don't help her clean her house - clean up messes SHE has made! Yeah, right, like that's going to happen!

So what I'm thinking is this: I'm going to get a job that pays me enough money that I can pay off some bills, pay a mover and resettle myself in a place where I feel comfortable and loved.

My question is this: Does this "friend" deserve to ever hear from me again once that is done?

My present stance is "Hell no!"

The figure skating competition(s) were entertaining and annoying simultaneously! The entertainment came from the brilliant skating, both in the team competition and in the individual events. The judging was questionable in the Ladies' Final and both Johnny Weir and Tara Lipinski were annoying as hell, never shutting up. And Johnny Weir acted more like a cheerleader than a commentator. How many routines (I stopped counting) did he proclaim to be "flawless"? As far as the final event, the Ladies' competition, was concerned, the scoring was incomprehensible and WRONG. Clearly the "stacked" judging panel had something to do with it. there is no way that Russia's skater deserved the Gold. Maybe the bronze, but both Yu Na Kim and Carolina Kostner skated far more skillfully and with more exquisite lyricism. And those things matter. The "secret" judges seem to me to be a total flop!

However, Hanyu deserved the Gold, as did Davis and white. The team medals were awarded accurately.

Now onto my regular kvetching. There were dark roots and dirty skate laces, as well as soiled skates. This is the OLYMPICS kids, and these things ARE important. Feathers and sequins and lovely lacy costumes are wonderful, but good grooming matters!

Finally, MAO ASADA. I have never really cared for her. She has always seemed somehow cold and arrogant to me. However, at these Olympics, she displayed a level of courage and the heart of a champion. After ending up in 16th place after the short program, a result that left her near tears. She came back in the final and skated with courage, skill and pure beauty. it was a flawless performance which left her 20 points ahead temporarily and gave me respect beyond measure.

So now on to the rest of the Olympics!
Posted by Gayle Miller at 1:00 PM No comments:


First, I am hoping that all of us will pray for the safety of all our athletes. We need to put our faith in Vladimir Putin’s determination to keep the athletes and the venues safe for all, including spectators, officials, coaches and other peripheral personnel. If it was our president insisting that the Games will be safe, I’d be far more worried, but like him or not, Putin is a man who is proud of his country and will not want any blot on it similar to the one on Munich!

Men’s singles: Patrick Chan of Canada should win, with Jeremy Abbott and Jason Brown showing well but not medaling. Japan’s immensely talented team of men should take Silver and Bronze.

Women’s singles: Yu Na Kim should win Gold again with Mao Asada and Gracie Gold joining her on the podium.

Ice Dancing: Davis and White are the clear favorites with Virtue and Moir joining them with the silver and perhaps another North American team taking the bronze.

Pairs: No clue and prediction. There is no team as talented as we’ve seen in the past. China doesn’t have a dominant pair, nor does Russia. Maybe the Germans or French will surprise everyone.

There has been a lot of really superior skating going on around the world and we're going to get the benefit of watching the beauty and athleticism that results from all the hard work and hours upon hours of training. Make no mistake, the fact there there is music in no way lessens the sheer physical efforts required to make it look so graceful and effortless.

Posted by Gayle Miller at 1:42 PM No comments:

IT'S DECEMBER 1st -- DO YOU KNOW WHERE YOUR WEBSITE IS?

It appears that the ACA website, aka Obamacare, is still not working as it should. They are now very proud of the fact that 50,000 people can be on it at one time. How many people are on Facebook or Twitter at the same time? Just curious.

It's time to admit that the ACA is an unworkable, disastrous screwup, Mr. President, and consult with PROFESSIONALS who can help you undo the damage you have wrought on the American citizens you are supposed to Preserve, Protect and Defend.

And while you're at it - quit firing high ranking military officers, you bozo. You will never, ever get the majority of American military to turn on the American citizenry and if you try to do it, you'll face the same challenge that prevented the Japanese from invading the American mainland during WWII - we outgun you!
Posted by Gayle Miller at 2:34 PM No comments:

Since we know the Democrats will attempt to vote multiple times, we must make sure that we vote our one legal time and ensure that the wishes of the actual electorate prevails. And I would urge you to remember that a vote for Sarvis is, in reality, a vote for McAuliffe.

Even the smartest of people have, over time, started to believe some of the outright lies and deceptions perpetrated by the Leftwing on Ken Cucinelli and for that reason, if no other, I will be voting for him.
Posted by Gayle Miller at 12:11 PM No comments:

Kanye West opines that his immorata, Kim Kardashina (famous for having NO talent and using the word "like" 43 times per sentence) should be on the cover of Vogue. Huh? With that deformed figure? He further opines that they are, as a couple, more influential than the President and First Lady. Now THAT would be a public service for sure. He and his baby's mother would likely be less destructive of this country!
Posted by Gayle Miller at 9:47 AM No comments:

ON TO IMPORTANT STUFF!

Yes, indeed, we are experiencing creeping socialism in this country and yes, our president, elected by the least educated and least intelligent of our voters, is a complete flop and yes, the Obamacare law and rollout are both disasters, but let's discuss the REALLY important news....Chris Brown is in trouble again, Kim Kardashian is engaged (again) and Snooki got tossed from Dancing with the Stars last night (which actually is a shame because she was very good).

Do you see where I'm going with this? We need to prioritize, hit our knees in prayer for our country and our way of life (which is, without doubt endangered) and trust in G-d that all will be well!

Meanwhile, vote for Bill Engvall and Leah Remini!
Posted by Gayle Miller at 8:18 AM No comments: 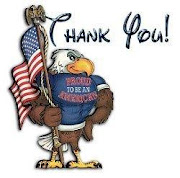 Proud to be an AMERICAN